On A Mission to Win

Intertops Casino pays tribute to one of the most famous action and martial art actor, Jackie Chan, in the new slot game – Fantasy Mission Force.

Based on the Hong Kong action movie with the same title launched at the 80s, we made The Fantasy Mission Force slot game for our players. The complete game is fulfilled with the actual movie photo highlights taken straight from the blockbuster. Online free play option of the Fantasy Mission Force is available for all visitors, as well as play for real money here with us, but before you try it, see what bonus potential awaits you!

For younger population unfamiliar with the plot, it follows a story of a group of misfits who are sent in an effort to rescue some allied generals who were taken hostage by the Japanese during World War II. Two small-time crooks, including Jackie Chan, accidentally join the group and help save the day. Funnily enough, though it is often marketed as a Jackie Chan movie, he actually only appears in Fantasy Mission Force in a handful of scenes, as a supporting role; not your typical Chan moment, but nonetheless, he owns it!

The vivid graphics will transport you directly into the middle of this cult classic, full of symbols like bullets, guns, knives, jet planes along side icons depicting some of the actors from the movie. 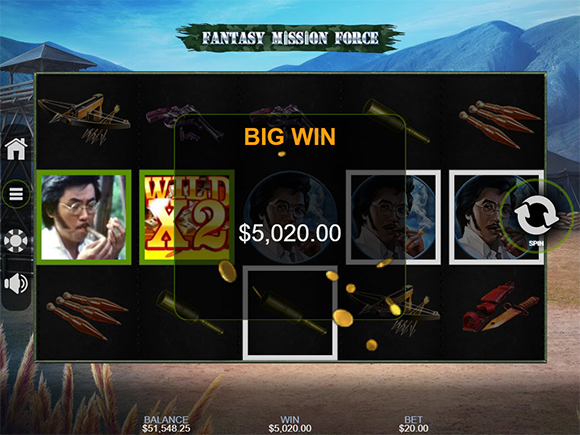 The same as movie, the Fantasy Mission Force slot from Realtime Gaming (RTG) is jam packed with action! It will make you want to keep your eyes out for the scatter, depicted by bundled dynamite and the bag of money, which steps in for the wild. The wild does not appear on reel 1 and substitutes for all the symbols except for the scatter.

These two symbols prove the most lucrative while you play the Fantasy Mission Force online slot and both come equipped with their own multiplier, potentially earning you additional massive wins!

To trigger the various free spin options, you will need to land the dynamite scatter on reel 1 and the wild bag of money on reel 5. This will award you 7 free spins. During this round, all your winnings will be tripled and you will receive additional multipliers whenever the wild or the scatter appear during the free spins round.

Additionally, if you see a time fuse on top of any symbol during a free spin, it can explode, awarding you with the amazing Kaboom feature where three or more fuses on screen will earn you three extra spins, per fuse. This way your original 7 free spins can turn into unlimited free games!

Last but not least, an explosive random jackpot can be triggered.

The Fantasy Mission Force slot game produces wins very frequently and offers up to 50,000x the bet per line, so saddle up for your mission and get ready for some huge wins in this video slot – available on Download, Instant Play and in the Mobile Casino!

Jackpot City Casino launched back in the 90s when online casinos were taking off. Since then Jackpot City casino has adopted modern and innovative new features. They value what's important to appeal to new customers and keep current ones happy.

History of Gambling in Canada

Writer wins $95,600 in poker after learning how to play the game